There wasn’t much rest for the weary last Friday. After the cathedral and the chapel we were bused straight to La Alhambra. From the highway, we passed through a tunnel and emerged at the foot of a mountain. The road leading up was steep, and I couldn’t believe how easily the bus driver maneuvered the bus around such tight turns. To our left was, hands down, the most stunning view I had seen so far: the city of Granada in the valley below, a sprawling mosaic of towering buildings, olive groves, orchards, and even forest.  Our whole tour of La Alhambra was full of resplendent sights right from the start, when we walked down a path with trees on both sides rising up. A cascade of pure water from the Sierra Nevada flowed to our right, and as we walked on higher we came to the palace of Charles V. Inside there was an impressive circular patio with two levels and a high colonnade that opened up to the cloudy sky. Originally designed by Pedro Machuca , this elegant palace also has phenomenal acoustics, as we heard when Vanessa walked out to the stage and started singing. Then we moved on to the various Nasrid palaces. Though the Palace of the Lions was closed off for construction, we had the opportunity to see the lions in a smaller, well-lit circular room. All twelve statues, each representing a month, had their tails tucked in between their legs, an indication of their subservience  to their masters.

Once we reached Generalife, the outer gardens of La Alhambra,  it wasn’t long before the clouds opened up and a light rain began to fall. When we took a group picture in the patio of the irrigation ditch, it began to rain harder, and we ran for cover. We laughed and kept stopping to take pictures of the pink and purple flowers, even though we nearly got soaked in the process. The myrtle bushes and rosebushes were small reminders of the gentle omnipresence of nature, which I enjoyed time and time again during the tour. I thought spending almost three hours in an old fort would hardly be fun, but I was definitely wrong. La Alhambra was easily the most memorable sight we had visited. The Nasrid architecture, the cool mountain air, and the light rain were all enjoyable, and I came away with a deep sense of peace.

One more thing. We got our tests back last Monday, and I felt the tension in the air as everyone waited nervously. In Culture, Idola passed my test back face down. I turned it over, found an 84 circled in red, and breathed a sigh of relief. Then in grammar, she did the same, and I thanked her even before I saw my second grade: an 85. I had studied hard, and it paid off. A trip to Cádiz as a reward? Definitely. 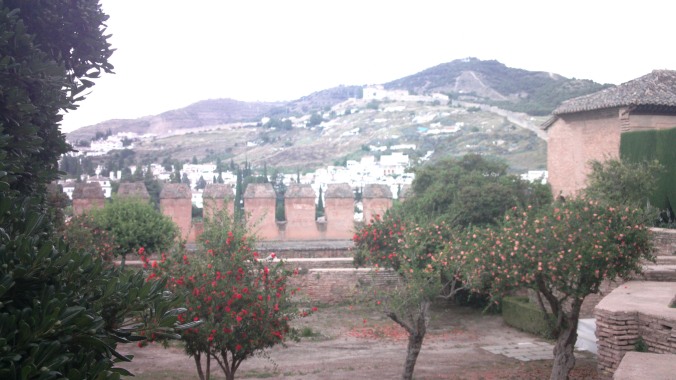