Horror as witnessed from within is an experience that few mediums have perfected. Where horror novels and movies have dared to tread, few video games have gone to immerse viewers in the most deranged themes and darkest recesses of our human psyche. Cry of Fear not only ventures into these gloomy depths, but thrusts players into a hellish realm of suicide, isolation, and heinously terrifying creatures. The horrors you confront are unnerving, painful, and enduring. 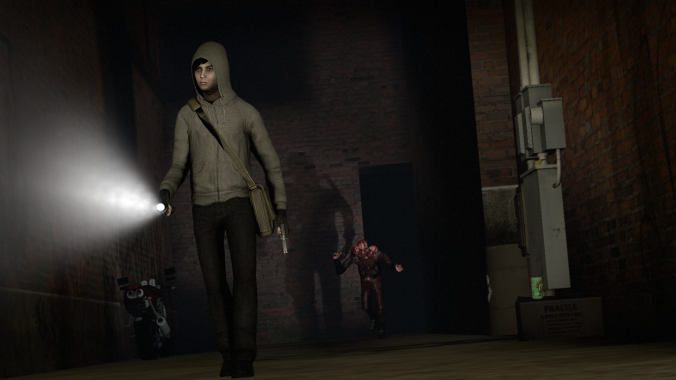 In Cry of Fear, you take control of Simon, a troubled teen who ventures home late one night, only to come across a distressed citizen crawling on the sidewalk. Tricked by this twisted stranger, Simon is hit by a car and awakens into a nightmarish world, a black void that he navigates only with the flash of his camera. Returning to a tenuous reality in the narrow alleyways of a quiet Scandinavian town, he begins his real descent into hell. There is no time to separate reality from insanity; strangers and Simon’s mother beg for his help via text message. Armed with only the narrow light of your phone and a switchblade, you must navigate the night and fight bizarre monsters to uncover the truth.

Ambiance is paramount in Cry of Fear, as tension builds with every creaking door, fleeting shadow, and shift in the game’s mesmerizing soundtrack. The game, developed by Swedish-based Team Psykskallar, crafts rich environments replete with European architecture and long stretches of cobblestone streets. Transitions between areas are seamless, and the slow-building sense of dread often erupts with jump scares that are chilling without being overblown.  Your first encounter with a physical monster doesn’t happen until several minutes into the game, after your first puzzle and a few glimpses of beings that just don’t look quite human. You navigate a dilapidated apartment, complete with notes from a child murderer who is never seen, dank sewers, and a twisted subway, among several other memorable levels. Truly chilling are the other-world areas, where blood-soaked walls, twisted pathways suspended over a black abyss, and ghostly narrations from Simon’s doctor instill a very primal sense of fear.

When you must fight, the combat mechanics quickly become intuitive while still presenting a pulse-pounding challenge. Most weapons have a secondary attack and require a precise combination of accuracy, timing, and dodging in order to be well used. At first uninspired convulsing humanoids, the monsters quickly become more twisted and unpredictable. Screeching  ballerinas with gaping eye sockets and spear-like limbs, writhing zombies that crawl after you, macabre patients strapped to hovering upside-down beds, and other indescribable horrors. While other psychological horror games such as Silent Hill 2 are primarily driven by unseen evils, Cry of Fear throws screaming, bloody, and tortured figures at you in between moments of more subtle unease. True terror rarely comes from a mind untouched by real-life anguish and loathing. This is where Andreas Rönnberg comes in.

A 22 year-old native of Stockholm, Rönnberg first showed us his twisted side with a mod called Afraid of Monsters. Released on December 23, 2005,  A.O.M. showcased Rönnberg’s ability to breathe life into the Half Life Gold Source engine. Cry of Fear is Andreas’ second venture into the world of psychotic breakdowns and first-person fear. In an interview with Glenn Winkelmann Jr., Rönnberg stated, “Many things inspired me to make psychological horror. Mainly my interest in dreams and how the mind works…and about drugs, I’m not really interested in it, I just wanted a good reason why you would see hallucinations and monsters in Afraid of Monsters.” Not what you’d expect from a kid who has worked as a mailman, jams out with his hardcore band, and goes to school.

The themes in Cry of Fear mirror the angst and rebelliousness of a typical college guy: experimenting with drugs, pouring your heart out to the one girl who doesn’t feel the same way, and bucking the advice of misguided doctors. While it’s not easy to root for Simon as he injects himself with syringes of morphine and pushes his psychotherapist away, we are compelled to follow through with his tale until the grim end, knowing full well that his dark heart will contaminate us in some way. There are only two minor characters who Simon encounters, making for a journey bereft of comedic relief and human intimacy.

Along with James Marchant, Rönnberg has given birth to a nightmare that is more immersing than Resident Evil and more relentless than Silent Hill. For a video gaming community long deprived of shocking frights and haunting enigmatic story lines, Cry of Fear is a godsend that will feel like a demonic presence the moment you turn out the lights and load your first game.