Good evening my good readers and bloggers! I’d like to give a special shoutout to all the writers participating in NaNoWriMo who have made it through week two and continue to write full steam ahead.

I know this past week was extra challenging for me, particularly because many of my fellow counselors and interns are weighted down by the influx of hatred and prejudice our nation is seeing. I too am scared for the survivors that we counsel, many of who fear sexual assault and racism now more than ever before. 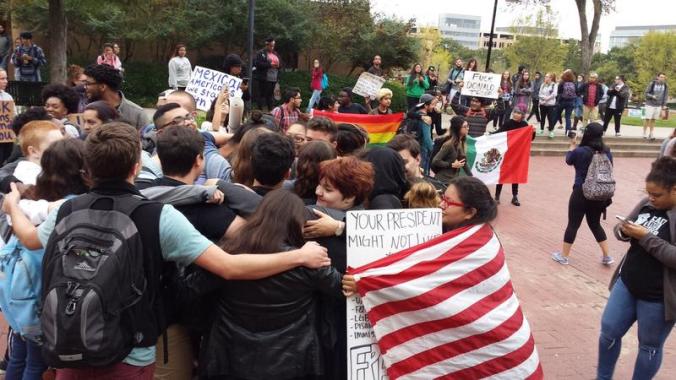 Peaceful protests at my university. Retrieved from http://mediad.publicbroadcasting.net/p/kera/files/styles/medium/public/201611/unt_demonstration.jpg

So I write on. I carry this dream like a torch. It seems so fitting that my latest novel should reflect upon how good-hearted people stand up to their own demons in the wake of the end of the world.

Tonight I’d like to present an excerpt from chapter one of my current work in progress. I’m currently at 19,241 words in Stalder Press to Handstand. Hoorah! Please, if you can spare just a few seconds writing a thoughtful comment, that would make my night just a little brighter!

Something comes with the latest gust of wind in the night.

“You okay?” Jake was whittling down the end of a pine branch we’d gotten out of the backyard, making the tip sharp enough to start a fire with. Or stab a predator. But he sees me stop now, my own blade in hand, and watches me as I set my stick and knife down.

In the silence that elapses between us, we listen as another gust of wind rattles against the walls of the tri house, the name my roommates and I gave it back in the summer of 2014. Two years past now feels like a decade gone by.

We both hold our breath.

The camping lantern in the center of the kitchen table whispers and sighs, the flame dimming and dancing less and less. We’re on our last bottle of Nu-Flame, but my agitation over that fact is wiped away now as I sit and strain to hear, letting my ears do the leading.

From the second tier of our multi-leveled back yard I can hear Thunder start barking again. This time I pick up the raw fear in his voice, hear him alternating between snapping yaps and low growls. Jake and I lock eyes and signal We are a-go with a fierceness in our eyes. We rise instantly, both of us clutching our folding knives. Leaves lash against the boarded-up windows, where the blinds are down for good measure. Tree branches creak and groan in the backyard. But I know it’s no longer the wind passing through.

It’s the unseen. How many I don’t know.

Then the tinny humming starts.

“Radio!” Jake barks it out even as I move to the counter and swipe the closest one up. It’s a red handheld radio, one a bit more faded from a few years of use. He watches as I flip the sliding switch to the ON position, then turn the knob to the loudest and most distorted station I can find.

Thunder’s barks grow more and more panicked. I turn to the center island in the kitchen, where we’ve stacked six over-the-head hunting earmuffs. I snap one pair over my head before tossing Jake a bright green pair. He catches them, fumbles for a half second, and is able to cup them over his ears.

The windows start to vibrate.

I nod to Jake as I hold out my radio.

He returns my signal and, standing next to the back door, raises his walkie-talkie like a pistol before gripping the doorknob with his free hand. His curls bob on his head, and I can see the muscles in his calves tensing, ready to lunge. The humming has risen to a roaring buzz, almost mechanical in nature, which we can both hear even through the earmuffs. I hear Thunder yelping now, pleading.

“Go!” Though my voice is muffled, my words seem to rattle in my rib cage. Jake throws the door open – and the shock of the soundwaves nearly brings me to my knees.

I only have to take one step out onto the back patio to see the inchoate darkness swirling overhead. The unseen loom among the dead tree branches overhead, and I scream and raise my radio. I imagine I must be crazy, expecting the static to carry over the roar of the creatures. So I stumble forward, thankful for the protection as the air literally vibrates in front of me. I have to shut my eyes, the force so strong that I fear my eyeballs might pop. I scream even louder, and this time I hear a return noise: shrieks of pain.

In the swirling chaos, I feel Jake by my side as he hurls radio after radio up onto the elevated levels before us. The cacophony of static grows stronger, and the unseen let out another angry wail. I collapse onto my knees, the force like God himself had turned up gravity. Still the static prevails.

Before I realize it, Thunder is licking my face, gnawing at my cheeks and begging with me: Insideinsideinside. I grab hold of his red and black collar like I’ve done a dozen times before, then swing my hand out and catching Jake’s shoulder. “I got him!” The roar is abating.

Without a word Jake turns and, taking my hand, pulls us inside. Leaves and twigs are raining down on us now, and I stumble before kicking off with my back feet, praying and hoping that a large branch doesn’t come cracking down on my head. Looking down, I see myself cross the threshold, Thunder already two steps ahead of me as he helps Jake haul my ass in the rest of the way. Then Jake swings around and shoulders the door shut. The sudden cessation of air force causes a small explosion of dead leaves and bits of wood that scatters out across the kitchen floor.

Lying on my back, barely even able to laugh as Thunder licks my face like crazy, I remove my earmuffs and listen as their harsh grating fades away somewhere to the southeast.

“Oh, Thunder, I’m so glad you’re safe, buddy,” I murmur, sitting up on my behind and rubbing him like crazy behind his shaggy grey ears. He looks so proud for having survived, his tongue lolling out and his teeth flashing in the pale glow of the lantern.

“He’s a survivor,” Jake says, collapsing into his chair as he drops his ear protectors. “Just like you and me.” He is smiling at me, and I return his smile, though I can see tiny cuts on his cheeks and forehead and feel a line of blood start to form on my chin.

Survivor. I listen to the radios blaring static outside and wish that I knew what that word really meant.